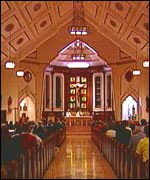 It's not all about numbers but no one could argue that measurements of weekly mass attendance are not, despite their limitations, of some value in assessing the state of the Catholic faith among the Irish people.

The Iona Institute has just released details of an opinion poll conducted on its behalf by Red C. Red C is the company which conducts the monthly Sunday Business Post political poll.

The new poll is best read as one in a series over the last number of years. The goal of this update is to provide a one-stop-shop for those polls.

Warning:: One must readily concede that these polls are of limited comparative value for several reasons- different interview methodologies; some companies poll 15-18 year olds, others poll only 18+; some figures refer explicitly to mass attendance among the Catholic sample whilst other refer to mass attendance in the general population, whilst others refer to general church attendance in the general population. All of these can influence results by a point or two when contrasted with other polls. Thus trends over a good spread of years is about as much from which one can draw conclusions.

Digest of Church Attendance Polls since 1972.

1972/3: Weekly Mass attendance among Catholics: 91%
(source: A Survey of Religious Practice, Attitudes and Beliefs in the Republic of Ireland 1973-1974, Research and Development Unit, Catholic Communications Institute of Ireland, 1975). 2.6% said they "never attend". 3.4% said they attended more than once per month.

2009: Weekly Church attendance among population: 46%
(source: Iona Institue/Red C; telephone interview of 1000 people, 18+). The question is slightly different to other polls. In this case, people were asked "When was the last time you attended a religious service in a place of worship?" as opposed to the more typical "How regularly do you attend a religious service?"
Posted by Catholic Jobs at Friday, November 20, 2009